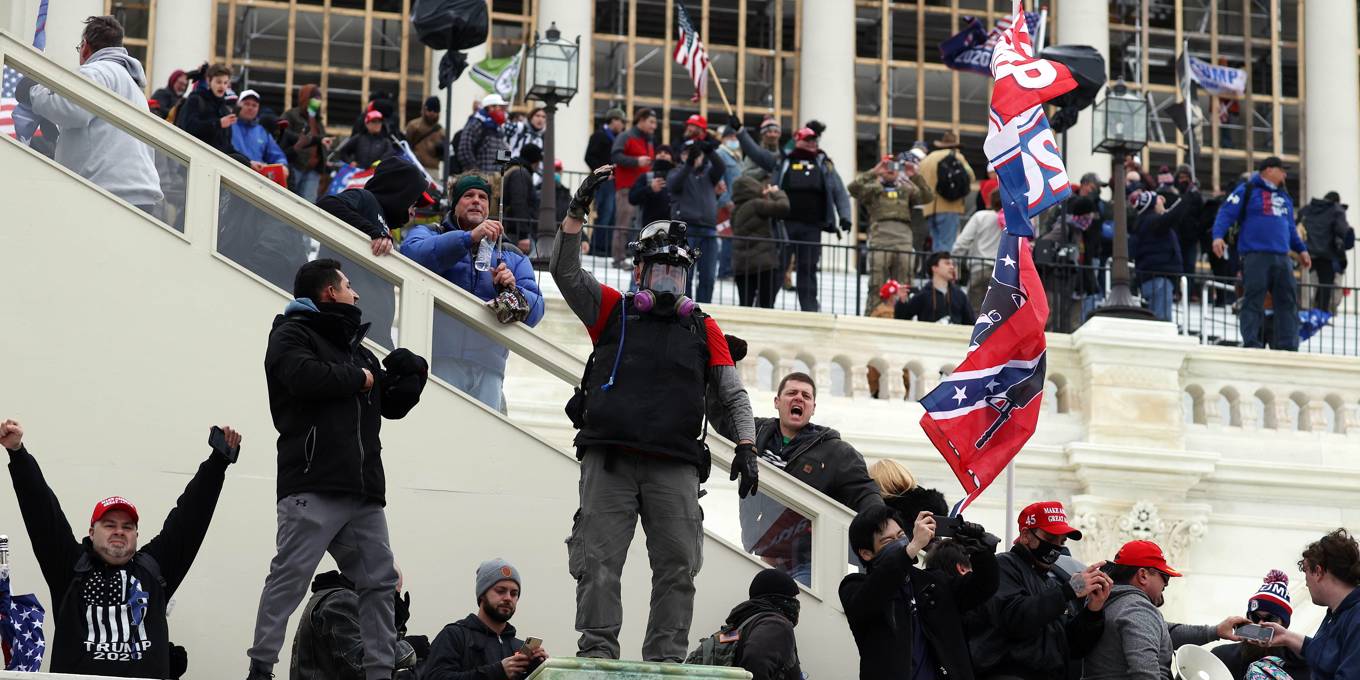 The storming of the US Capitol by Donald Trump's supporters in a last-ditch effort to overturn the result of the 2020 election was as predictable as it was shocking. Four years of Republican complicity in the face of Trump's erosion of US democracy have brought the country to its most fraught moment since the Civil War.
The January 6 insurrection at the US Capitol lacked the gravitas of the storming of the Winter Palace, that much is certain. Incited by President Donald Trump at a nearby rally, where he encouraged his supporters to march on the US Capitol, the mob did succeed in interrupting a joint session of Congress to confirm the Electoral College vote in favor of President-elect Joe Biden. But lawmakers will still carry out their constitutional duty, and Biden’s inauguration will take place on January 20.
The insurrectionists were nowhere near as disciplined as Lenin’s Bolshevik cadres of armed revolutionary soldiers and sailors. Most were paunchy, middle-aged, red-hatted “weekend warriors” who were as interested in getting a good selfie from the Capitol rotunda as they were with overthrowing the US government and establishing Trump as an unelected dictator. It was, as one commentator put it, a “Beer Belly Putsch.”
And yet, the insurrectionists’ actions – pathetic though they were – will have revolutionary implications for America’s self-image and standing in the world. For the first time in the country’s history, a defeated incumbent president summoned a mob to intimidate Congress into violating the US constitution to keep him in power. Aided and abetted by the right-wing press and rank-and-file Republicans, Trump’s four years of open contempt for democratic values, institutions, and norms have yielded precisely what he has always wanted: a lawless, nihilistic revolt against the “elites” by the “losers” that he has made into his core supporters.
Breaking windows and overwhelming the Capitol police, the rioters stormed into the chambers of the Senate and the House of Representatives, forcing congressional members and their staff to evacuate. As of this writing, one woman has been shot and killed, but it remains to be seen how many have been injured, and how much damage has been done to the Capitol building.
One thing that Trump does have in common with Lenin – as well as Napoleon and everyone else who has launched a coup against a sitting government – is his contempt for the rule of law and the political figures who came before him. Like Lenin, Trump resents norms that are meant to limit the exercise of power, and thus has little patience for the culture of compromise that underpins representative governments. And, like Lenin, he has a feral ability to sniff out weakness – not just in an established regime, but in his own sycophantic hangers-on, some of whom are prepared to violate their oath of office on his behalf.
Still, the regimes that were confronted by Lenin, Napoleon, Mussolini, and Franco were not only weak; they lacked the will to survive. The most notorious putschists in history were usually pushing on open doors.
Judging by his own behavior in recent weeks, Trump appears to have concluded that he was, too. To his mind, after four years of his attacks, America’s representative institutions lacked the will to defend themselves. How else to explain his efforts to strong-arm officials in Arizona, Michigan, and Georgia to “find” enough votes to make him the winner? Instead of seeing repeated official rebuffs as a sign that the American Republic was not yet ready to fall, Trump focused on the fact that he has paid no price for his efforts to subvert US democratic processes and institutions over the past four years. Having faced no consequences so far, why wouldn’t he keep pushing until the system broke entirely?
After all, the sad spectacle on Capitol Hill was also suborned by Republican lawmakers like Senators Ted Cruz of Texas, Josh Hawley of Missouri, and almost three-quarters of the Republican caucus in the House. All had openly signaled their intent to object to votes that have already been duly certified by state governments. Validating paranoid conspiracy theories of “voter fraud,” it is they who gave Trump – a true coward in any other circumstance – the bravado to egg on the baying mob.
But the “sedition caucus” is not the only culpable party. For four years, Republican Senate Majority Leader Mitch McConnell and the rest of the Republican Party have looked the other way as Trump degraded the US presidency. Following Trump’s impeachment last year by the House of Representatives, Republican Senators voted to acquit him, and then initially lent credence to his false claims of election fraud. Even today, as the mob approached the Capitol, McConnell continued to spread the lie that it was the Democrats who undermined American democracy first. Similarly, Senator Susan Collins of Maine has for years expressed “concern” about Trump’s behavior, but offered no resistance as he waged war on American institutions throughout his one and only term.
These spineless politicians will live in infamy, but so, too, will every Fox News journalist (and the broadcaster’s owner, Rupert Murdoch) who has parroted Trump’s lies. So, too, will the leaders of the social-media platforms – particularly Facebook CEO Mark Zuckerberg – that have served as fire hoses of disinformation and lies.
America now finds itself confronting something that hasn’t happened since the time of Abraham Lincoln: rejection of the constitutional order by a significant share of the electorate. While America’s adversaries watched the events of January 6 with glee, its many friends and allies around the world did so with dismay.
Like Lincoln, Biden will now need to confront this existential homegrown challenge head on. One thing is already certain: The Trumpian insurrection will not be pacified by soothing speeches about “moving on” without holding the guilty to account. For Trump, for the Republican Party, the brutal truth of Proverbs 11:29 must now be applied: “He that troubleth his own house shall inherit the wind.”
project-syndicate.org